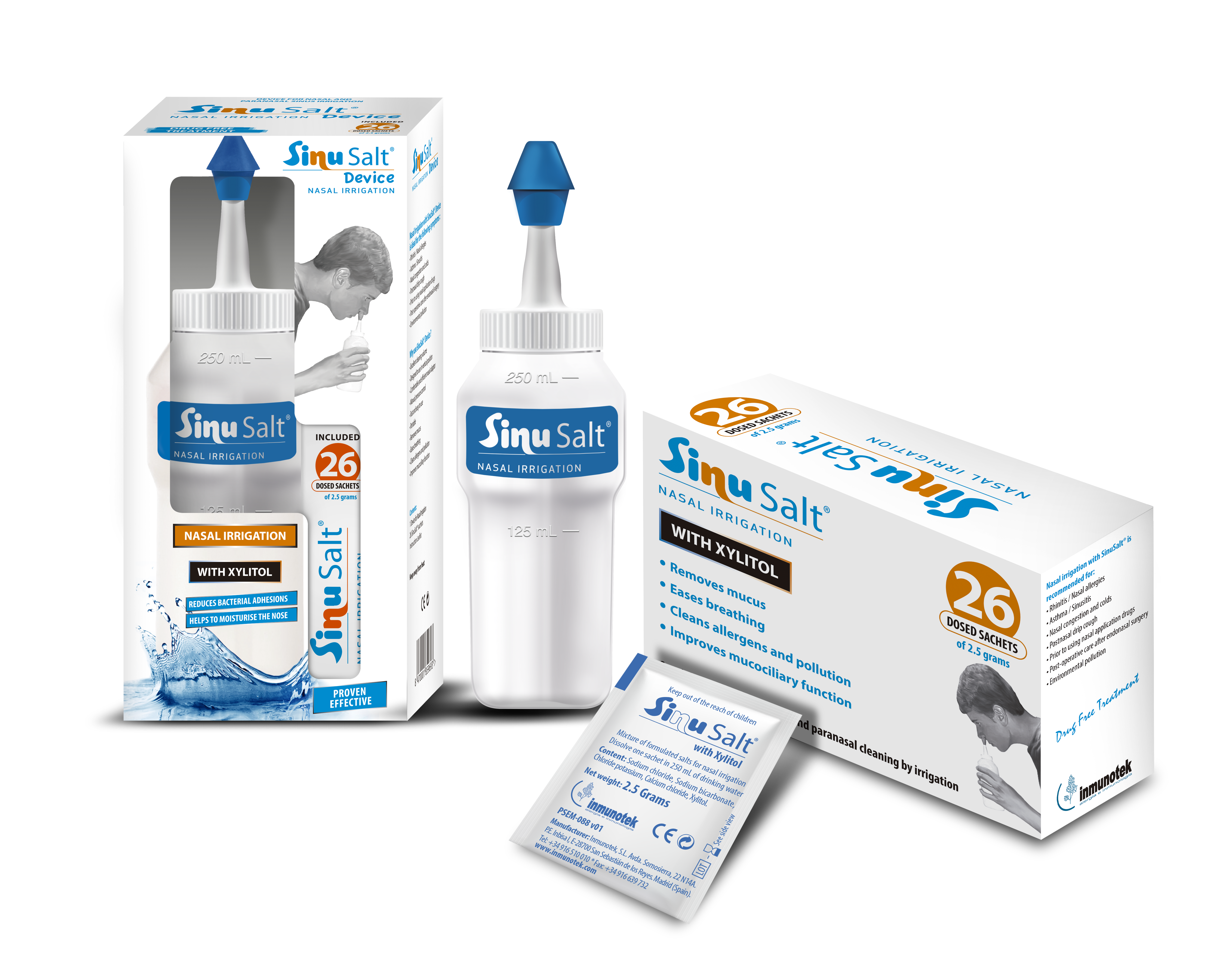 SinuSalt® is a non-medical nose cleaning system which restores ciliary function and maintains mucosal health. Microscopic cilia are responsible for mucus removal, and trapping environmental particles such as pollutants, allergens viruses, fungi, bacteria and other irritants. These particles can be retained in the nasal mucosa leading to infection, irritation, or an allergic response. SinuSalt® safely, quickly, and easily clears these particles.

Xylitol is a naturally occurring sugar found in many fruits and vegetable items. Its benefits are well documented including its antimicrobial and moisturising properties. It is therefore and ideal addition to a nasal rinse resulting in microbial clearance and nasal mucosa moisturising on top of the benefits of a rinse using saline alone.

Independent studies have shown that using a xylitol nasal irrigation system, over a saline only system, results in greater improvement of symptoms for patients with rhinosinusitis (inflammation of the nasal passages and sinuses)1,2, improved outcomes for postoperative patients3, and enhancement of the airway’s antimicrobial defence systems4. The utilisation of saline nasal rinses as an adjunctive treatment for allergic rhinitis (hay fever) is well documented.

Nasal rinses are recommended by allergy specialists both to alleviate hay fever symptoms and as a preparatory cleansing before using nasal inhalers.

Why we should use nasal irrigation further reading

What are the symptoms required to use Sinusalt?

SinuSalt is ideal for people who suffer from any kind of sinusitis or rhinitis, including the infectious and allergic causes that provoke excess of mucus and/or lear to nasal obstruction.

When intranasal drugs are administered, it is advisable to wash the nostrils before the application of any drug to avoid diluting with the mucus and minimising the physical blocking by the mucus, and thus achieve a greater efficiency.

After endonasal surgery, nasal washing is important to remove clots and scabs, and thus avoid adhesions.

In highly polluted environments, pollution causes inflammation of the nasal mucosa and disturbs the nasal washing system (mucociliary clearance). Nasal irrigation is recommended in these situations to wash the nose of the impurities deposited on the mucosa and to facilitate its removal. Numerous studies support the sinosnasal irrigation properties are being recommended as first-line treatment in several types of chronic sinusitis by the guidelines of the European Society of ENT.

Can I use Sinusalt in the allergy season?

SinuSalt is recommended when the nasal symptoms are aggravated by allergies. Nasal irrigation helps to improve the classic symptoms of allergies, such as rhinitis. Its use in the pollen season facilitates the elimination of the pollens that are deposited into the nose and thereby helps to reduce the inflammation of an allergic reaction..

How many times can I use Sinusalt?

SinuSalt is not a drug so using SinuSalt with SinuSalt XL sachets can be repeated indefinitely.

During the pollen allergy season, you should use SinuSalt in the morning, afternoon, evening and prior to the use of drugs administered through the nose to facilitate the absorption of its active principle, for example: bronchodilators and nasal steroids.

During the processes of nasal congestion caused by colds, etc… it is recommended to use SinuSalt 3 times a day (morning, afternoon and evening) to remove the excess of accumulated mucus.

In the event of suffering chronic conditions such as sinusitis, it is recommended to use SinuSalt once a day (morning or evening).

Can I use just water to prepare nasal irrigation?

No you cannot, you should not do nasal washes with only water. Nasal mucosa, unlike the oral mucosa, are extremely sensitive to salt concentration. Nasal irrigation with just water is painful and causes damages to the nasal mucosa, affecting the function of the nasal cilia and therefore its self-washing capability (mucociliary clearance).

Can I use common salt instead of Sinusalt?

It is not recommended to use common salt (table/cooking salt). It contains anticaking agents (ferrocyanide, silica, etc.) and many other additives (iodine, fluorine) that are irritating for the sensitive nasal mucosa. Unlike SinuSalt, common salt does not produce an irrigation liquid to neutralise the excess of chlorine. It also does not contain the ions (Ca, K) at the same concentrations that are present in the mucosa, and which are necessary so the irrigation does not dilute them. These ions are critical for the proper function of the nasal cilia. Furthermore, the Xylitol contained in SinuSalt is extremely hygroscopic and has a moisturizing effect on the mucosa, making the irrigation more pleasant and preventing the mucosa from drying.

Is this device suitable for children?

Yes, the SinuSalt device is safe for use by both children and adults.

Press the bottle softly so the height of the outlet liquid is less than 5cm. High pressures can be harmful. Always press with the thumb on the back circle of the bottle.

Whilst changing from one nostril to another blow through the nose to expel the mucus along with the irrigation solution. Do not force the expulsion by blocking one of the nostril with your fingers.

After the irrigation process some fluid may be retained in the sinuses that will be expelled during the next few minutes as a drip or slight flow. The expulsion of this liquid is improved by moving the head back, forward and sideways.

First irrigations may cause a front oppression sensation.

If in the event you have difficulties using the SinuSalt Device® please contact Customer Services on 01908 376376 or email info@diagenics.co.uk

Do not force the irrigation if the nose is completely blocked.

Ear infection may be a contraindication. Always check with a Doctor.

It is necessary to make a fresh saline based solution with SinuSalt XL for each wash, as it does not contain preservatives.

It is essential to adjust the water temperature in order to have a comfortable irrigation.  Luke-warm temperature is optimal.

If you have low quality tap water ( e.g. undrinkable water, excess chlorine, sediment, etc) use distilled water (available at pharmacies) or bottled drinking water. The use of sterile or boiled water may be advisable in certain pathologies (e.g. fibrosis) or after endonasal surgery.